The Story of the JT Cantrell Company

This article, from the November December 1973 issue of Antique Automobile magazine, was sent to me by the Huntington Historical Society.

On October 1, 1958 the property of J. T. Cantrell and Company was purchased by a window manufacturer. It marked the end of an era of wood "station wagon" bodies. Joseph Cantrell's company spanned that era. Indeed, its first body was fitted to a Model T Ford in 1915, and its last bodies were fitted to GMC and Chevrolet chassis in the late 50's.

Joseph Cantrell was born in 1875 in Sunken Meadow, N.Y., one of 13 children. The large family lived comfortably on their father's candle manufacturing business. As a boy, Joseph was fascinated with woodworking. After school hours found him in the local boat building shop, and this early training was to serve him well in later years. He continued boat building (including one 40 ft. sailboat) throughout his active business years and even after retirement.

Young Joseph didn't take much to books and schooling. His formal education ended in the fourth grade. For years he was an apprentice woodworker in boat and carriage shops where, slowly and patiently, he mastered the elementary skills. Hard work and a natural, innate ability distinguished him.

In 1905 he bought out T. F. Scudder's blacksmith and carriage shop in Huntington, N.Y. For three years, with less than a dozen employees, Joseph Cantrell engaged in carriage building and repair. In the three story building on Main Street he undertook all phases of construction, including making springs, wheels, and upholstery.

Business prospered as the carriages became appreciated for their quality construction and durability. In 1908 he moved the operation a few blocks away to Wall Street where business continued as usual. In 1913 he invited his younger brother Albert to join him as a partner. They conducted business under the name J. T. Cantrell and Brother. In later years, the brothers took a third partner, George W. Ruland.

Fine as the carriages were, it was a dying business, its demise hastened by Henry Ford's Model T automobile. Cantrell realized he would have to change with the times, and at the suggestion of J. A. Carlson, the Cantrells began building bodies for automobiles.

In l9I5, J. T. Cantrell and Brother built a forerunner of the station wagon on a Model T chassis and called it a "depot wagon." To their knowledge, this was the first of its kind ever to be built. The depot wagon was an immediate success and the brothers were flooded with orders.

This type of car filled a void. In 1915, Long Island and the surrounding areas outlying New York City were still largely rural. Its utilitarian concept of design, rugged quality, and well established reputation from carriage building made it a logical choice for the farmer who gave up his buggy for an automobile. It combined the wagon’s ability to haul loads with motorized convenience. Indeed, the term depot wagon referred to carrying goods to the train depot.

In the first few years of business the Cantrells built bodies exclusively on Dodge and Ford chassis for local customers. By the early 20's, however, they were building bodies on everything and anything. This writer knows of a 1924 Wolverine-Cantrell and a "horse plow" Franklin-Cantrell.

The business eventually outgrew the Wall Street plant, and in early 1925 a new plant was completed in nearby Huntington Station. This location had more floor and yard space as well as the advantage of a railroad siding to receive the chassis shipped from the factory. 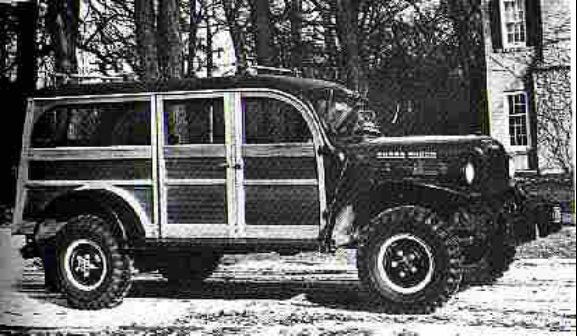 Soon after the move, however, disaster struck. One night during a snowstorm the building, fully stocked, caught fire. There was little the fire department could do. Fueled by the stored wood, the fire burned out of control throughout the night and by morning, little more than ashes remained. Nobody had thought to inform the brothers of the blaze. Needless to say, they were quite shocked as they drove up to the factory site that morning!

They went to work immediately on the same site and in May 1926 the new factory was completed. The firm was now operating under the name of J. T. Cantrell and Company.

Salesmen traveled throughout the New Jersey, New York and Connecticut area canvassing the many dealers who offered the Cantrell body to their customers. At the factory, the chassis were handled by make. For example, the Cantrells would obtain a shipment of Chevy chassis, build the bodies on them and dispatch them to dealers. Then they'd begin work on Dodges. When the Dodges were finished, work began on still another make.

When a new model came out, Joseph Cantrell would design a body for it, draw up full-sized blueprints and notify dealers of the make. Cars fitted with Cantrell bodies included Ford (Model T), Dodge. Chevy, Plymouth. Chrysler. Buick. Packard, Terraplane and Franklin. Probably more Chevrolets were fitted with Cantrell bodies than any other make of car, especially in the later years of the company's existence. This writer's first car was a 1948 Cantrell-Chevy that survived a decade of Maine winters in fine fettle. The frame was ash with panels of mahogany veneer. The roof was constructed of weatherproofed canvas stretched over ash ribbing.

During the depression years the cars were not built on an assembly line basis as they were in more prosperous years. Rather. when an order came in it was assigned to one man, who undertook all phases of construction.

The chassis arrived, virtually bodiless from the windshield rearward, at the Huntington Station plant hi railroad. The frames on most of the pre-war bodies were constructed of either rock maple or mahogany, with panels of white birch, mahogany or cottonwood. One undesirable characteristic of rock maple was its twisting and warping with age. All wood parts were submerged in toxic wood primer to prevent dry rot. fungus and insect attack. Panels were waterproofed. The body frame was strongly steel braced throughout. All exposed joints were joined with waterproof glue. The completed body was finished with finest quality spar varnish, baked on.

The Semi-Sedan model contained safety glass in the driver's door only and sport type curtains for the other openings. Half Sedan models had safety glass on all four doors and sport type curtains on the other openings. The four door Sliding Glass model had sliding glass on all four doors as well as the rear quarter side openings, with a close fitting curtain over the tailgate. The Sedan model was identical to the previous model except with drop glass instead of sliding glass on the rear quarter panels. A lift door for the tailgate was available in place of the curtain, if desired.

The Deluxe Sedan model had Philippine mahogany frames whereas the Carryall had hard maple posts and ribs.

Besides bodies, the company also upholstered the interiors. The front seats were adjustable and the rear seats could be removed for increased carrying space. Cantrell also designed and obtained patents for "safety tailboard fasteners". These were advertised as "rattle proof, quick acting, positive", and were manufactured for him by a local metal fabricator.

It was during the depression years that the company built several outstanding "one off" special design bodies. Cantrell designed and built a custom bodied Buick for the Marshall Field Estate in Lloyd Harbor, Long Island. The car had a specially constructed back door tailgate combination to transport bird dogs for its pheasant hunting owner. Another outstanding special was built on a Rolls-Royce chassis.

During the war years, the company did contract work for the War Department. Due to a shortage of automobiles during this period, this often meant converting sedans into station wagons. The car would be cut in two, the frame and driveshaft extended and strengthened, and wood built into the sectioned area.

These "altered sedans", used by the Armed Forces, were seen in all theaters of the war. One, painted battleship gray, was shipped to the Pacific where it was used in the battle for the Caroline Islands.

Many Cantrell wagons found their way overseas by other means. Both before and after the war the company did contract work for General Motors, Chrysler, and Studebaker Exports.

Post war years brought prosperity. Over a hundred employees produced almost two dozen cars a day, primarily on Dodge and Chevrolet chassis. The assembly line method was used. Joseph Cantrell managed the design and construction aspects of the work, while his brother Albert was concerned principally with the business aspects of the company. His sons, Dick Dickerson and Wilbur Percy, returned to the plant and assisted in the designing as well as the construction.

In January 1950, Joseph T. Cantrell announced his retirement from the company he had founded. After a half a century of building carriage and auto bodies, he sold his interest in the firm to his brother Albert, who continued production for several years.

Although he lives comfortably, Mr. Cantrell never made great amounts of money. He was a master craftsman, in the old world sense of the term, but an indifferent businessman. From studying the history of the company, their product and the man, one gets the feeling that he was not as concerned about the financial end of the business as he was about the quality of the finished product.

The Cantrell bodies were certainly strong and durable. Ask John Frieman of Islip, N.Y. As a young man in college he drove his Dodge-Cantrell off the Walter Blair Agency showroom floor in 1938. Since then he has driven 113,000 miles through rain, fog, sleet, snow, heat waves, sub-zero weather, floods and hurricanes. He commuted for years to New York City; carried chicken manure from his father's farm, and hauled his 11 hounds to hunt. Replacement of the roof fabric was the extent of his repairs to the body! He still uses the car for around town transportation.

In retrospect, it is remarkable that this small company successfully spanned the era from horse drawn carriages to motorized wagons, and continued specialty building throughout its entire existence. Indeed, the company played a major role in all aspects of wood coachwork. They built the original "depot wagon" of the teens, the "suburban" body of the twenties and thirties, custom made specials, contract work during the war, and finally. during the twilight years of their era, constructed the last of the wooden station wagons as the manufacturers went to all metal bodies.

Joseph T. Cantrell now spends his leisure time on his hobbies of sailing and woodworking. I recall an article from a local paper a few years back about Mr. Cantrell building a sailboat with his 11-year-old grandson. He still lives on Dewey Street in Huntington, where he has for the past 50 years, just a mile from the site of the old plant where, many years ago, the depot wagon was born.