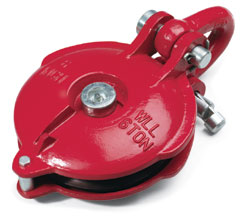 This may be a silly question, but what's a snatch block? I've seen several winching accessories, but don't recall one being a snatch block.

"Snatch block" is a specific type of block. A "block" is a "sheave", which is a wheel with a grooved edge to hold the rope or cable, combined with an axle or pin, side plates and a means of attaching it to something, typically a hook or shackle. Blocks are used in "block & tackle" combinations using multiple sheaves and two block assemblies, to increase mechanical advantage.   A "snatch block" is a specially-designed block which is used to "snatch" loads or anchors, and is designed so that the side plate can be opened or swung away for the easy insertion of a loop of rope or cable without having to thread a bitter end through the side plates, and can thus be inserted anywhere in the cable without having to remove the load first to change the direction of the cable pull.   Snatch blocks are one of the most mis-understood and misused items in the RV winching field, and can cause enormous harm and death if not properly rigged.   Remember, if you overload a cable/snatch block, and the block parts from the anchor, you have a 10 or more pound missile flying at great speed, which can kill instantly.   The most important thing to remember about snatch block winching, as used in the typical 4wd sceneario, is that there is tremendous force applied to the block/anchor even when using a single-block system for a simple change of line direction.

No mechanical advantage, 1 pound of pull required for each pound of lift/tension.

Mechanical advantage = 2/1 (1 pound of pull results in 2 pounds of lift/tension).

Now for the IMPORTANT part; The amount of force applied to the *block* is dependant upon the angle between the incoming line (to winch), and the anchor line (to tree)! The total load on a block can be as much as *2 times* the load applied. The maximum force on the block comes when the angle of the two lines is 0 degrees, or are parallel to each other as shown in #2 above. The actual load varies with the angle between the legs.

Here is the table from the Crosby Group catalog:

Angle is the measured angle between the legs of the line as they pass over the block sheave. Factor is the multiplier for the applied line load to calculate the block load.

In the illustration above, IF the bitter end of the line is *not hooked to the winched vehicle*, but is hooked to a tree or rock next to it, for each pound of winch force applied, the block will be under *twice* the load, while the line strain will be equal to the line pull. So if you apply a full 12,000 pounds of pull, you are putting 24,000 pounds of stress on the block/anchor.   If, however, the bitter end *is* attached to the winched vehicle, the block becomes a "traveling block", even though it is attached to a solid object, because the vehicle itself is actually doing the "traveling", and the load on the *line* is halved, since you are using two lines to "support" the load.   In this case, the mechanical advantage is 2/1, so you get 2 pounds pull for each pound of winch effort. Now, since you have two lines splitting the load, let's say it's 10,000 lbs. (you're *really* stuck), the line load is halved to 5000 lbs per line, but the *block* load is still 10,000 lbs because of the parallel line angle factor of 2.   As you can see, while the load on the winch is cut in half, as is the line speed for winding, the load on the block is *not*, and is equal to the total line load.

This is why using a properly rated and carefully maintained block is of the utmost importance when winching. In most winching situations, "double-lining" is the best method to reduce stress and strain on the lines and winch motor, at the expense of speed, but may be the *worst* thing you can do from the safety or block standpoint, if your block is not adaquately rated or is in poor condition or if you don't know the strength of the anchor or the stall-pull of your winch. The block is being subjected to twice the force of any of the other components, and consequently the winch operator may never know he is exceeding the capacity of the block until it parts and takes his head off. This is especially true when using very powerful winches.

Imagine the stress on a block (and it's anchor as well) when the SUV owner with the Warn 12,000 lb winch double lines to pull his vehicle over an obstacle and sticks a wheel behind a rock, locking the vehicle in place. The winch is already rated for 6 tons single line pull, and adding a traveling block doubles the pulling force to 12 tons. If your snatch block is (as many are) underrated for the winch/line combination, and you have a 6 ton rated snatch block, or even a "really big 8 ton-rated" block, which is commonly sold with RV winches, you still have the potential of block failure because you are using a 6 - 8 ton block with a system capable of exerting 12 tons of force under circumstances where you might not recognize the actual pulling force you are exerting, because you are not really stressing out the winch.

A recipe for disaster

This is *even more true* of hydraulic winches, which, unlike electric winches, usually pull until something breaks. With an electric winch, there is a built-in "safety" mechanisim which is that near the maximum-pull winch-stall load, the motor draws enormous amounts of amperage and heats up quickly. This means that the motor will usually stall due to lack of available amperage, increased electrical cable resistance due to heating, or motor overheat long before one can actually reach the rated pull, which is determined under lab conditions.

With a hydraulic winch though, the hydraulic motor runs happily along, getting slower and slower, and exerting more and more force, until something snaps, and will *rarely* stall before reaching breaking load.   So, one must be *extra* careful when using hydraulic winches, since the winch appears to be quite happy, and is just getting slower and slower, and the typical RV person expects it to stall, which it won't.

Please keep in mind that we are always talking about the "safe working load limit" here, and while the ultimate failure safety limit is typically 5 times the working load limit for commercially-rated hoisting gear, it may be less, or non-existent in cheap, uncertified blocks, *particularly* "surplus" blocks available at low price.

NEVER, NEVER, NEVER!!!!! USE AN OFF-BRAND, UNCERTIFIED OR SURPLUS BLOCK WHEN WINCHING.

Good blocks are expensive for a reason. You spent big bucks on your rig, and big bucks on your winch, don't, for gosh sake, scrimp on your block!   I bought two 15 ton McKissick Light Champion snatch blocks on eBay, they cost about $125 each, and are worth every dime.